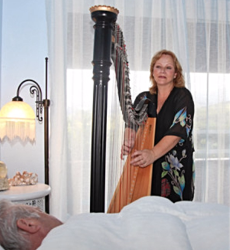 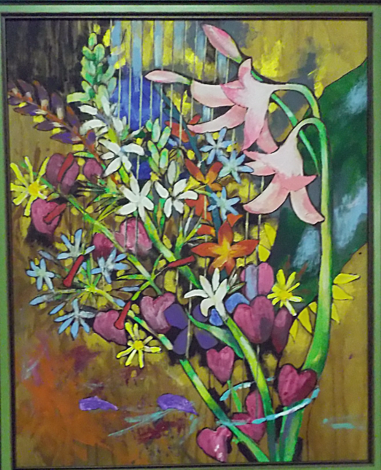 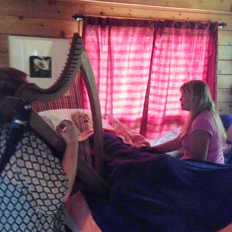 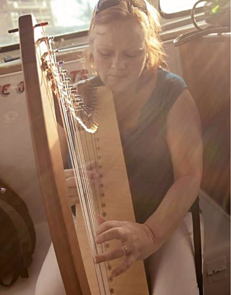 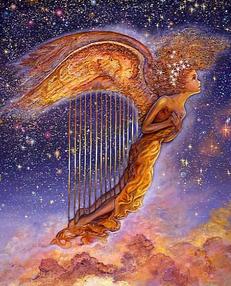 Harp therapy is the practice which employs the use of a small harp as a bedside instrument with the intention of alleviating the recipient's symptoms and to provide comfort and health. This goal may be emotional, physical, mental or spiritual in nature. The soothing sounds of the harp not only can enhance the quality of life with passively hearing and feeling vibration, but create the possibility of interactive work in which the recipient might play the harp.

The IHTP (International Harp Therapy Program) is recognized by the NSBMT (National Standards Board for Therapeutic Musicians.)  The IHTP has graduated over 1500 students in 25 countries, with approximately 350 active practitioners in the United States, and another 150 plus active practitioners worldwide.

All living things have a resonant tone (acoustic resonance.) Acoustic resonance is the tendency to absorb more energy when it is forced or driven at a frequency that matches one of its own natural frequencies of vibration (its resonance frequency) than it does at other frequencies.

The harp is specifically effective in therapeutic settings because it is the most resonant instrument of all instruments as the plucked strings vibrate freely. Strings are not dampened against a fret or sound-board, rather plucked openly, which creates this unique series of overtones. A harpist may play a “C” note, which will elicit the octave “C” overtone, which will elicit a “G” fifth overtone and so on. While the human ear cannot hear all of the overtones, we certainly react to them, and the harp resonates with a larger population than most instruments because of the subliminal overtone responses. Furthermore, harp practitioners are trained to hear the resonant tone of each patient and each setting. (The hospital sounds, machinery, beeps, rolling carts, etc… Every sound has a resonant tone.) The patient may be breathing in the key of C, but the hospital equipment may be beeping or pinging in the key of G. The therapist would be trained to play in the complimentary keys of C, Em, and G (depending on the mood and situation) so that the sounds of the harp are in harmony with both the patient and the hospital noises. Entrainment occurs when a harp therapist is in tune with the patient and all of the extenuating factors affecting the well being of the patient and the therapist has the ability to create sound that harmonizes with each and every factor.

In March 1997, San Diego Hospice joined forces with the IHTP to provide harp therapy for hospice patients. For a period of 15 years' classes, approximately 25 students from around the world have come to San Diego Hospice annually for their training in the Hospice Division of IHTP schooling. Each year the hospice staff noticed profound relief changes in areas of anxiety, agitation, restlessness, pain, breathing and fear when harp music was provided for patients and their families.  It was documented that blood pressure rates decrease and oxygenation levels increase when harp music was played. The harp music provides a calming atmosphere for caregivers as well.

San Diego Hospice and the IHTP Have collected data from hospices and hospitals around the country for the purpose of researching the beneficial aspects of sound and music on anxiety, fear, nausea, breathing and pain. The initial data, along with response from patients and families, indicate that the presence of beautiful harp sounds are very effective in relieving anxiety, pain and fear and improving respiration and heart rate stabilization.

The fourth visit to Charlie was magic. He was sitting on his bed with a piece of ply-wood that he was painting on and water-color paints all around him. He was painting a picture of his final days on this earth, full of flowers and a harp. He claimed that he could not die until the painting was finished. I played music for Charlie while he painted and spoke about his youth, philosophy on life, and how he was not afraid to die. Charlie claimed that he was not homeless, that he chose to live outside and that the world was his home.

Charlie passed away two days after his painting was finished. Many people appeared at his funeral service and spoke eloquently about this amazing person. It turns out that Charlie was somewhat of a celebrity artist with works in museums in New York and Paris. They told stories about Charlie living on the street with a book in hand, using an uncashed check for one of his paintings in the amount of $10,000 as a book-mark.

Charlie’s final painting was gifted to Hospice Maui and is displayed in their offices today, but his true gift was in teaching me how to be a better harp therapist. I will never forget this wonderful, cantankerous man who knew the true meaning of life and death and beauty.

The Story of Charlie

Charlie was a homeless bone cancer patient who was discharged the hospital and taken in by a staff worker who took pity on him. Charlie turned away several hospice volunteers in the first two weeks of his home care visits, and the staff was running out of options to support this loving family in need of respite. Charlie was also in need of assistance with daily care while the family was away at work, and the situation was becoming more dire for the caregivers and patient alike.

After two weeks, Hospice Maui asked if I would try to bring the harp into the home to calm him a bit. Charlie was my second patient after finishing my residency. Our first visit did not go well, but he did not kick me out, which was an improvement over previous hospice staff. He steadfastly refused to allow me to play the harp and wanted to talk. Charlie’s probing was his way of coping with his situation. Eventually, Charlie stated that he was not ready for bedside music, but that maybe I could go into the next room and play something softly. I played for him for the next two hours… from the next room. Charlie was sleeping soundly when I departed that day.